This question is one that brings great confusion when asked. This is because it’s difficult it all depends on what the individual that is asking calls a guitar.

In this article, we will be giving you quite a number of answers to the question “when was the guitar invented?” You would have to pick the one best suited to what you think the word “guitar” should encompass.

Now if your definition of the guitar also encompasses guitar-like instruments like the “lute”, then it is very difficult to trace the year of the invention. Those instruments have been around for over 3000 years now.

Do you want to see what a lute looks like and how it sounds? Watch the video below:

From the video, however, you can tell that although this is made from wood and has six strings, it is not a guitar, at least not by modern-day standards. They have completely different looks and the sounds even make them farther apart from each other.

So while we can say that the guitar got its inspiration from instruments like this, we can’t call this a guitar, because of how different the two instruments are. 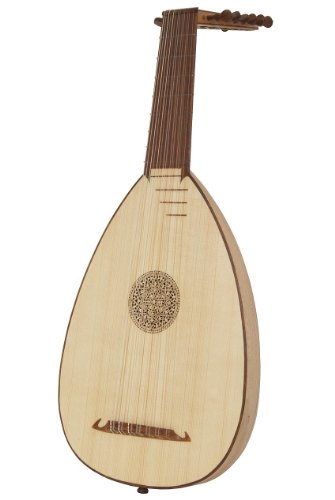 Click here to check this out and buy on Amazon now.

Most scholars believe that the invention of this instrument should be looked at, closely, when you’re discussing the topic of guitar invention. This is because, unlike the lute, this instrument bears a lot of similarities to the modern-day guitar in both looks and sound.

The vihuela makes use of 6 courses (these are double strings), a lute tuning system, and a very thin top. They are a lot bigger than the Lute, resembling the guitar more in terms of size.

If you want to see what the vihuela looks like and sounds like, then watch the video below:

You can already tell from the sound that we are getting much closer to a modern-day guitar. So, if your definition for “guitar” can fit this instrument, then the answer to your question “when was the guitar invented?” should be the early 1500s.

Something to note, though, is that this instrument later involved to what is known as the Baroque guitar. It uses the same double strings and tuning mechanism as the vihuela, but it’s a lot slimmer with a thinner neck. Also, it often comes with a 5-course string set.

Below is a video of what that looks and sounds like. You should definitely check it out:

From the name “Baroque guitar” this modded version of the vihuela should definitely enter your list for guitars and would date its creation to the 1600s. 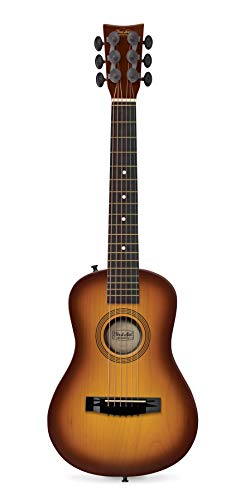 Click here to check this out and buy on Amazon now.

This is where the name guitar is firmly used to name the instrument. Most of the features that you have in the modern-day guitar are present in this guitar. You have six single strings, the same tuning system, metallic frets,  and so on.

They were widely produced by a small town in France called “Mirecourt”. This town was also responsible for creating and supplying many of Europe’s violins at the time. So you could say they were quite skilled.

You could even get this as an 8-stringed guitar with two extra bass strings. Out of all the instruments we’ve talked about today, this is one that you can look at and within a glance, call it a guitar.

It can play all you classical music effortless and even some guitar songs, especially with those two extra bass strings.

This is the sweet-spot for most people. Because apart from the instrument itself, there are many other references that point to the existence of “the guitar” around the same time.

C.F Martin opened his U.S shop in the U.S in 1833 in which he made “guitars”. However, it dates further back from there when you consider the fact that he was an apprentice in Germany before owning his shop.

The final reference we are going to point to is Fernando Sor. He was known as the “Beethoven of Guitar” and made a living as a traveling guitarist in the early 19th century.

The Most Popular Answer — When Was The Guitar Invented?

Torres altered the body dimensions of the guitar a bit which created better acoustics within the body, and he also made the top wood a lot thinner. The thinner the top, the more easy it is to vibrate, which helps to project the sound of the instrument better.

Also, the guitar top needed to be stiff and responsive so Torres placed thin braces on the underside of the top. That gave the top the necessary stiffness and the ability to be shaped to get a better tonal response.

All these little changes made the guitar a lot louder and a lot more versatile. Every luthier at that time, even till today, copied Torres. Some made some additional tweaks here and there, but you can trace the major change to what is the classical guitar today to 1852 in Sevilla, Spain.

So which of these inventions do you think the modern-day owes the most to? The oldest Lute? The vihuela? The baroque guitar? The other early 19th century guitars? Or Torres’ classical guitar?

Want to hear what Torres’ guitar sounds like? Then you definitely need to watch the video below. It’s a first look at one of Torre’s first guitars which he made in 1868: