In this article, we are going to teach you everything about what a guitar scale is. We’ll also teach you why you should learn them, the best way to practice them, and even how to create your very own guitar scales.

But so we don’t put the cart before the horse, let’s answer the question that’s on your mind.

What Is A Scale?

The first thing you need to understand is that a scale is a musical term that not only relates to the guitar. It can easily be interpreted by any musical instrument and is the same across the board.

The best way to visualize a scale is by looking at the keys on a piano. So, on a piano, there are seven white keys and 5 black keys. Each of these keys is a note and these twelve notes make up the complete chromatic scale.

Every other scale you have is derived from this chromatic scale.

And from this, we can simply define a musical scale as a way of ordering these twelve notes that we have in Western Music.

Now, note that we said “Western Music” when we defined a scale. This is important to note because music existed before musical theory. So, people who formed music in the past didn’t make use of the same scale system we have today.

While today we use what is called the “major and minor scales”, if you go back to the medieval times, what they had then was a system called “Church modes”.

However, since we are no more in medieval times, all that is not important. In this day and age, to understand musical scales, we would advise that you start with the major and minor scales.

Understanding Scales On The Guitar

Now that we have been able to easily visualize the chromatic scale using the piano, it’s time for us to switch to our preferred instrument, the guitar.

Basically, that means playing every note, both fretted and open notes from the open low E string to the open high E string, using just the first four frets. This is the complete chromatic scale on the guitar over two octaves. 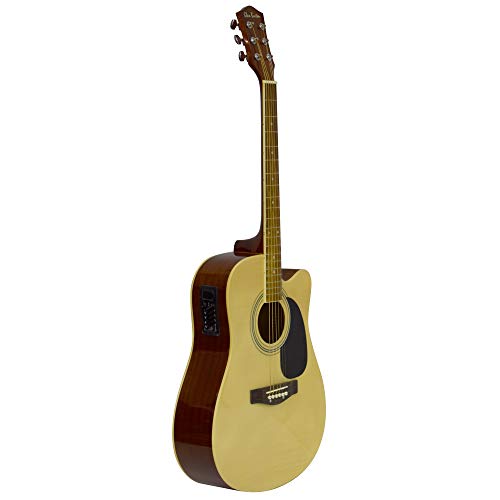 What Is A Guitar Scale Called?

Scales usually take their names from the first note that is played. For example, all three scales- C major, C minor, C diminished, all start with the note “C”.

Most major and minor scales have seven notes in them. However, some other scales use more than 7 notes, while others (like the pentatonic scale), uses less than seven notes.

What Is A Guitar Scale Pattern?

The benefit that guitarists have with regards to learning scales is that unlike pianist, you can use one scale pattern anywhere on the fretboard to play it on different keys.

For example, if you’re playing a major scale that starts with the low E string on the fifth fret (this is an A note if your guitar is tuned correctly), you are playing an A-major scale. However, if you shift two frets upwards and start on the 3rd fret of the low E string instead, you would then be playing the G-major scale, using the exact same scale pattern.

There are a lot of different scales. There’s the major scale, the minor scale (which has three different forms), the whole tone scale, the pentatonic scale, the diminished scale, as well as, a lot of other scales that have their origins in India and Spain.

In fact, by altering an existing scale, you can even create your own scale.

Do I Really Need Scales As A Guitarist?

While you can definitely survive as a guitarist without any knowledge on scales, it would be very difficult for you to understand why things sound the way they do. It would also be difficult to create music with other musicians because you won’t have a language to communicate your ideas in.

Just think about it like this. As an American, you can survive without learning to speak English. However, for you to be able to communicate with other Americans, you would need to learn basic grammar. So as a guitarist, think about your scales as “learning how to speak properly”.

If you’re just picking up the guitar for the first time, however, we would suggest that you learn chords before looking at scales. Think about it like learning a few new words you have to learn when you step into a new country where they don’t speak your language. Basic things like “hello” “good morning” “my name is…”.

However, after learning all those, you would want to learn a lot more about the language. Then, you have to start learning how those words and basic phrases are formed. That’s when as a guitarist you would have to start looking at scales. Because they are basically the building blocks of chords.

The Two Guitar Scales That Every Beginner Needs To Know

There are two main scales that every guitarist needs to know when you’re just starting out. These two scales are- the major scale and the pentatonic scale.

So first, let’s start with the major scale.

To play it across the strings instead of just on one string, you’ll need a pattern. And for this pattern, most people use numbers for the fingers. So, “finger-numbers”. There are only 4 fingers you can use to play across the fret and they are numbered 1 — 4 from the index finger to the pinky.

The pattern for any major scale then becomes:

To better understand this pattern and the major scale, we suggest you watch and follow the video below:

Once you understand this pattern, you can play the major scale on any key simply by shifting the position of the root key, which is the first key.

The major reason why the pentatonic scale is often the first scale a guitarist learns after the major scale is because it’s one of the easiest. Why? Well, because it has just 5 notes in it. Hence its name “Penta”. Remember “Pentagon” from high school maths?

We’re going to be starting off with the A minor pentatonic scale.

The A minor pentatonic scale has the following notes:

In fact, this is the most popular scale for guitar solos in Western music. Most guitarists know the scale pattern for the A minor pentatonic by heart because of how frequently it is turned to in solos.

Apart from solos, this scale is used for a lot of other things, including creating a slightly melancholic sound.

Just like the major scale, once you understand this scale pattern, you can move it up and down the fret to play it on whatever key you want.

To better understand the shape of the minor pentatonic scale, we would suggest you watch the video below. It’s an intro to pentatonic scales in general and it would greatly help you out if you’re still confused.

Just like a human, once you’ve lived in a particular place for a while, you obviously want to learn more about the language to be able to communicate more effectively. It should be the same as your guitar. The better you get, the more scales you should learn, as they are the building blocks of everything in music.

If you’re a beginner, then you have to check out our article on – 13 Tips To Take From A Beginner To A Pro.